(FOTO:Blic/Andrija Ilić)  Belgrade’s first Pride Parade was organised on 30th June 2001 under the slogan “There is Space for All of Us”. The small number of those who gathered at the Republic Square were attacked by members of right wing organisations and sports fan groups. The police forces were insufficient and unprepared and did not react adequately to the violence. More than forty people were injured, and there was no Government reaction.

Law on Broadcasting foresees fight against hate speech in radio and TV broadcasts, including one based on sexual orientation.

Law on Public Information was adopted, sanctioning hate speech, including one based on different sexual orientation.

A group of activists gathered in 2004 with the intention to organise a new Pride. The preparations took several months, but after the escalation of violence in Kosovo and the burning of mosques in Belgrade and Nis in March 2004, further preparations ceased and the Pride was cancelled.

Labor Law was adopted, banning workplace discrimination based on sexual orientation for the first time.

Law on Higher Education that guarantees equal access to higher education for all, including citizens of different sexual orientation, was adopted in the National Assembly of Serbia.

Law on Higher Education that guarantees equal access to higher education for all, including citizens of
different sexual orientation, was adopted in the National Assembly of Serbia.

Blood Transfusion Institute agreed to change a section of its database which existed until that year under the title “0041 – Highly risky sexual behaviour: homosexual, bisexual, promiscuous”.

Law in Personal Data Protection was adopted, stipulating that the data reffering to, among other things, personal sex life, is particulary sensitive and can only be collected on the basis of informed consent.

Serbian Medical Society Informed Labris that “same sex orientation is not a disease”.

In spite of strong resistance by religious communities and the withdrawal of the law from the parliamentary procedure, the Law on the Prohibition of Discrimination was adopted, completely prohibiting discrimination based on sexual orientation in all situations.

A Pride Parade under the slogan “It is Time for Equality” was prepared and was to be held on 20th September 2009. The realisation of the event was supported by many public figures, international organisations and government representatives. There were numerous public threats by sports fan groups and extremist against Pride Parade organisers and its participants. The authorities pressured the organisers to move the event to the Usce park. The Ministry of Internal Affairs banned the event a few days before it was supposed to take place. 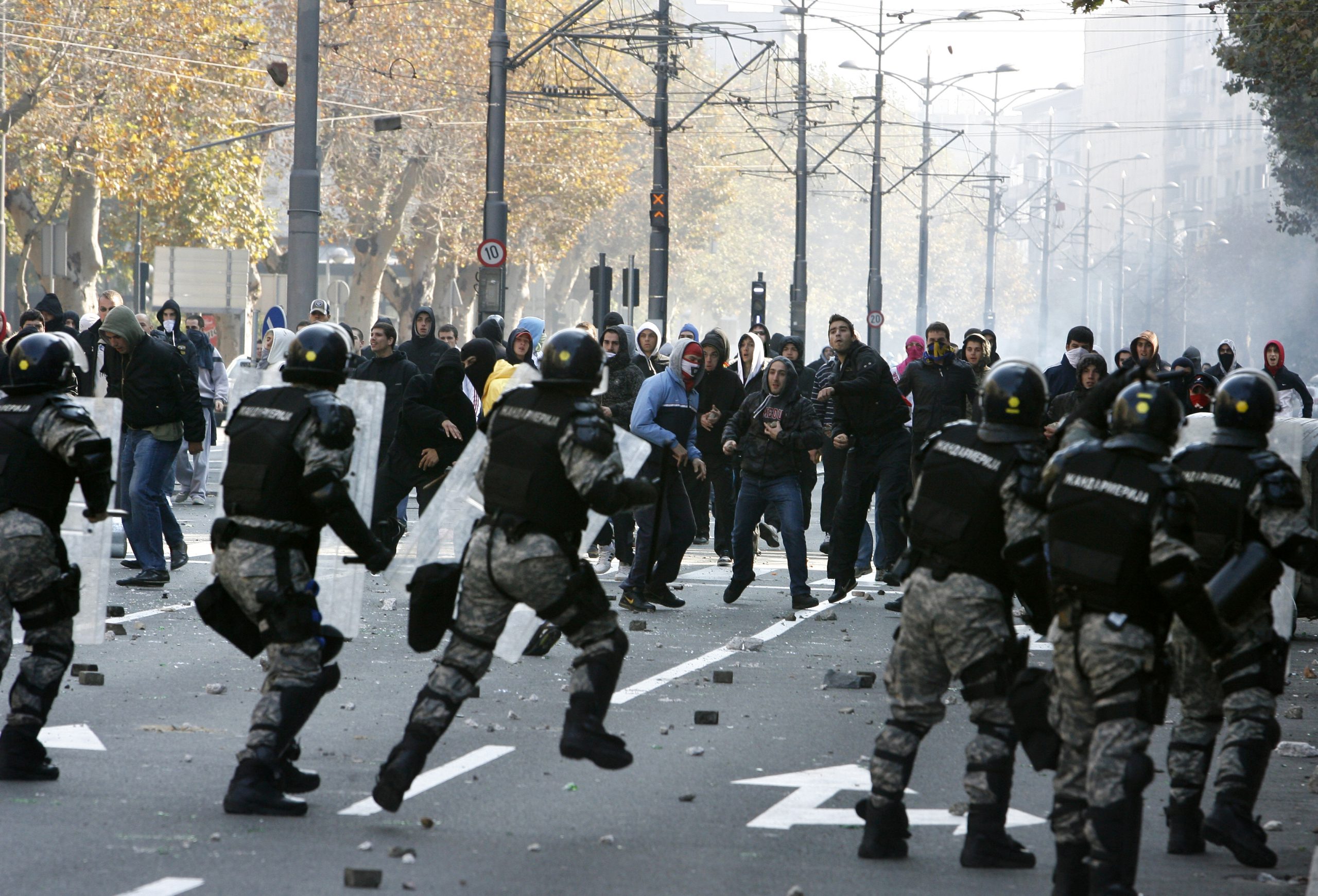 (FOTO:BETA/Emil Vas)  Pride Parade under the slogan “We Can Do It Together” was held. The walks began on 10th October 2010. In Manjez park gathering more than 500 partiipants. Although the authorities gave guarantees to the organisers, the assessment was poor and there were massive conflicts between the police and hooligans that took place in central Belgrade, the estimate is that there were 6,000 police officers in the streets and the same number of hooligans. During the riots 132 policemen and 25 citizens were injured, and around 250 people were arrested. The same year marked the first time Pride Week was organised, and it remained the only part of Pride 2010 that was without security issues. 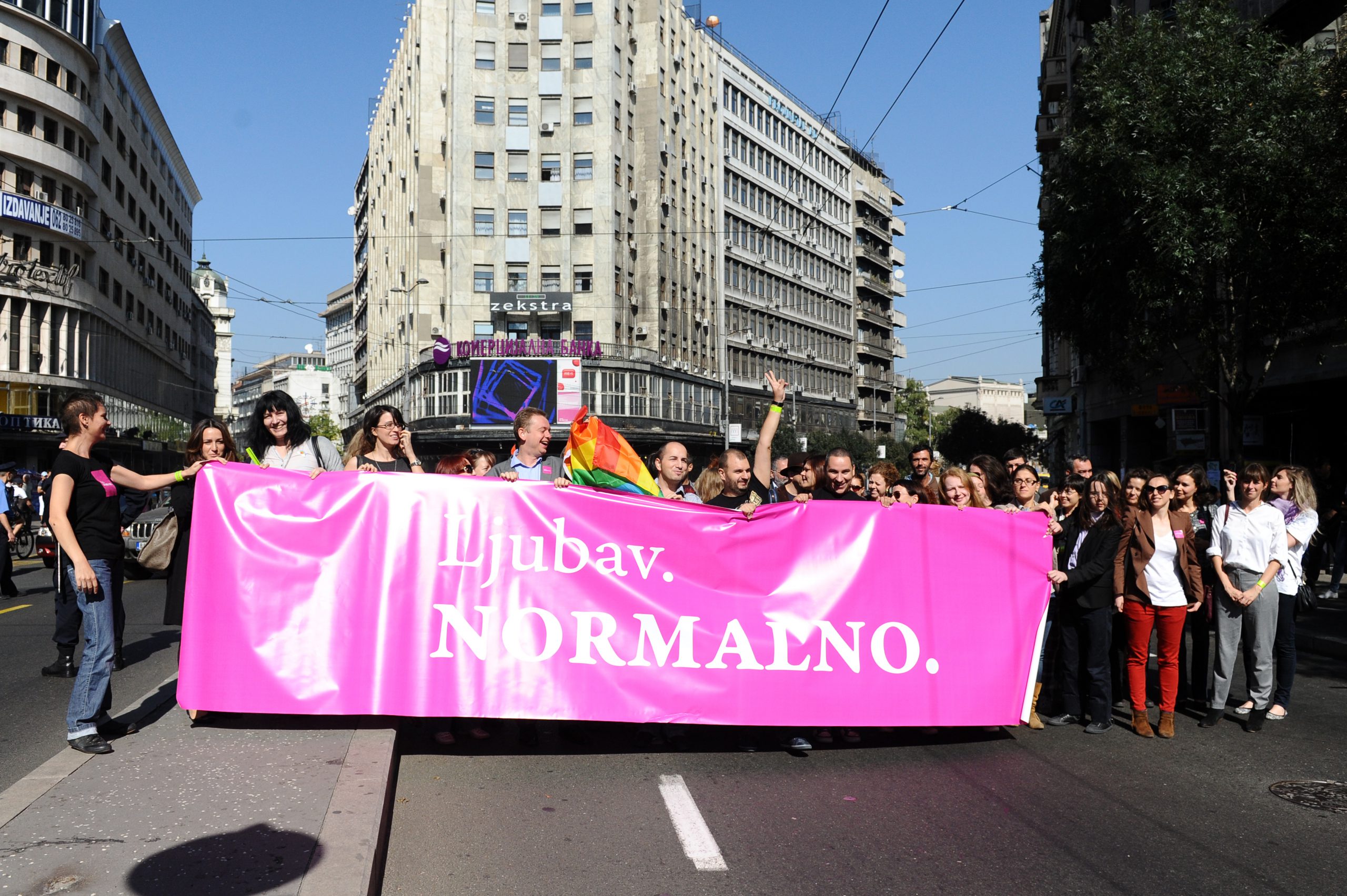 The Constitutional Court of Serbia made a decision that the 2009 Pride Parade ban was unconstitutional.

Law on Youth was adopted, banning discrimination of youth, including one based on secual orientation.

A first instane verdict for grave discrimination against LGBT+ persons was passed against the politiian Dragan Markovic Palma.

Law on Social Welfare was adopted, forbidding discrimination based on sexual orientation, among other things, of social welfare users.

Belgrade Pride 2011 that was held under the slogan “Pride. Normally” was banned with the explanation that the state was unable to guarantee the safety of participants. As a reaction to the ban, the activist organised “Pride in Private” at the Belgrade Media Centre, after which they went out onto the main Belgrade street, spilling rainbow colours on the roadway and stopping the traffic whilst carrying the banner that stated “Love. Normally“. The Pride received strong support in the country and abroad. The Pride Week was held without incidents, and with much more diverse agenda.

Amendments to the Law on Health Insurance stipulate that at least 65% of the cost of a sex change medical treatment conducted for medical reasons shall be secured form the funds of the national health insurance. 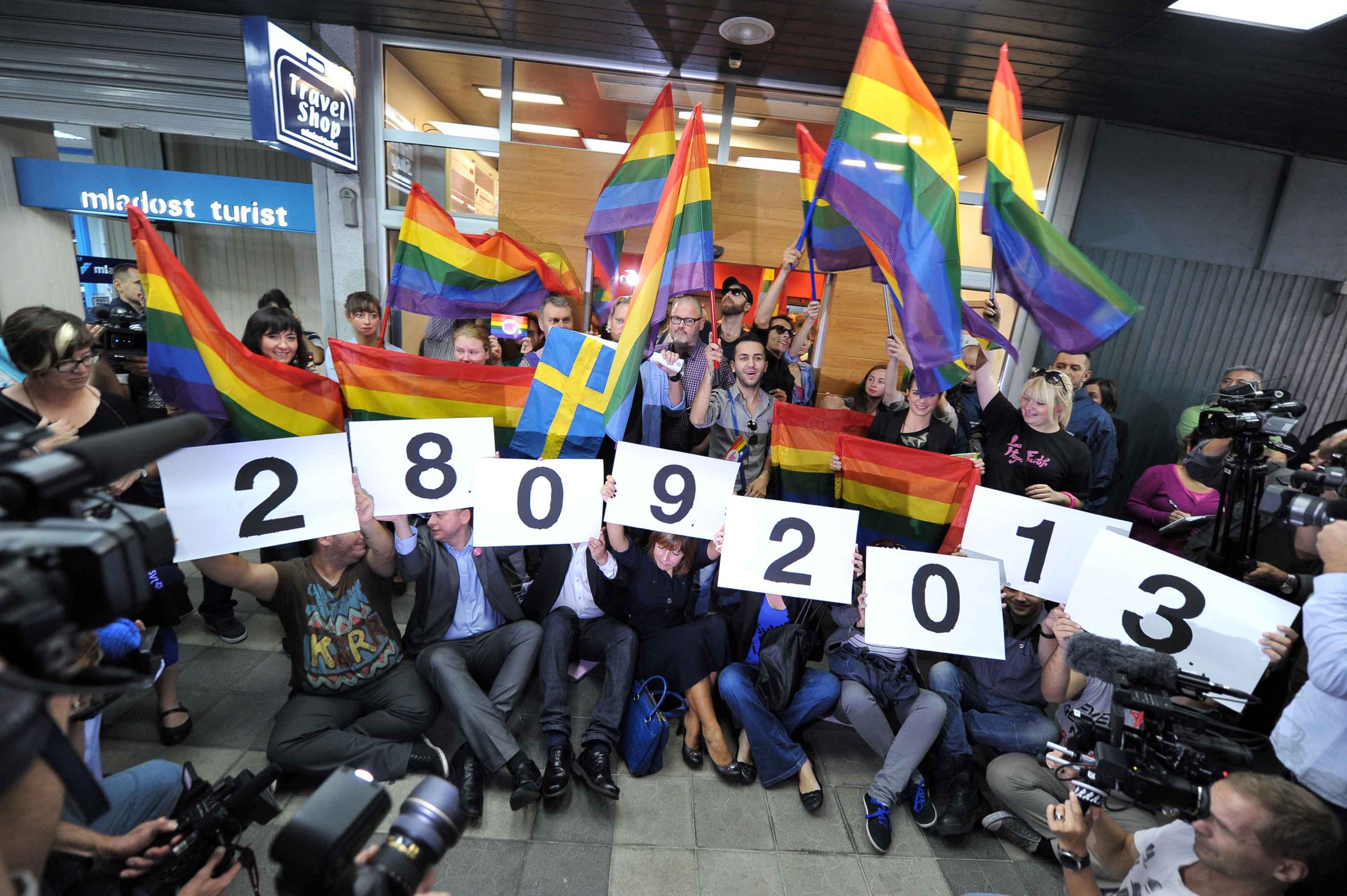 Amendments of the Criminal Code introduced the legal concept of hate crime whereby the fact that a crime was committed because of one’s sexual orientation, among other things, would be considered as an aggravating circumstance.

The Constitutional Court of Serbia banned the far right Patriotic Movement “Obraz”, whose members were the most responsible for organized violence at the 2010 Pride Parade.

Belgrade Pride 2012 under the slogan “Love, Faith, Hope” was again banned by the state. The official explanation was that the state was still unable to guarantee security at the event, and the decision was given to the organisers just before the event. As a reaction to the ban, the activists again organised another “Pride in Private” at Belgrade Media Centre, after which went in front of the building and announced the date of the 2013 Belgrade Pride. The Pride Week went through peacefully except for massive extremists protests before the exhibition “Ecce Homo” in which the author used Biblical motives. In spite of the protests, exhibition was held at the Centre for Cultural Decontamination with a large audience. 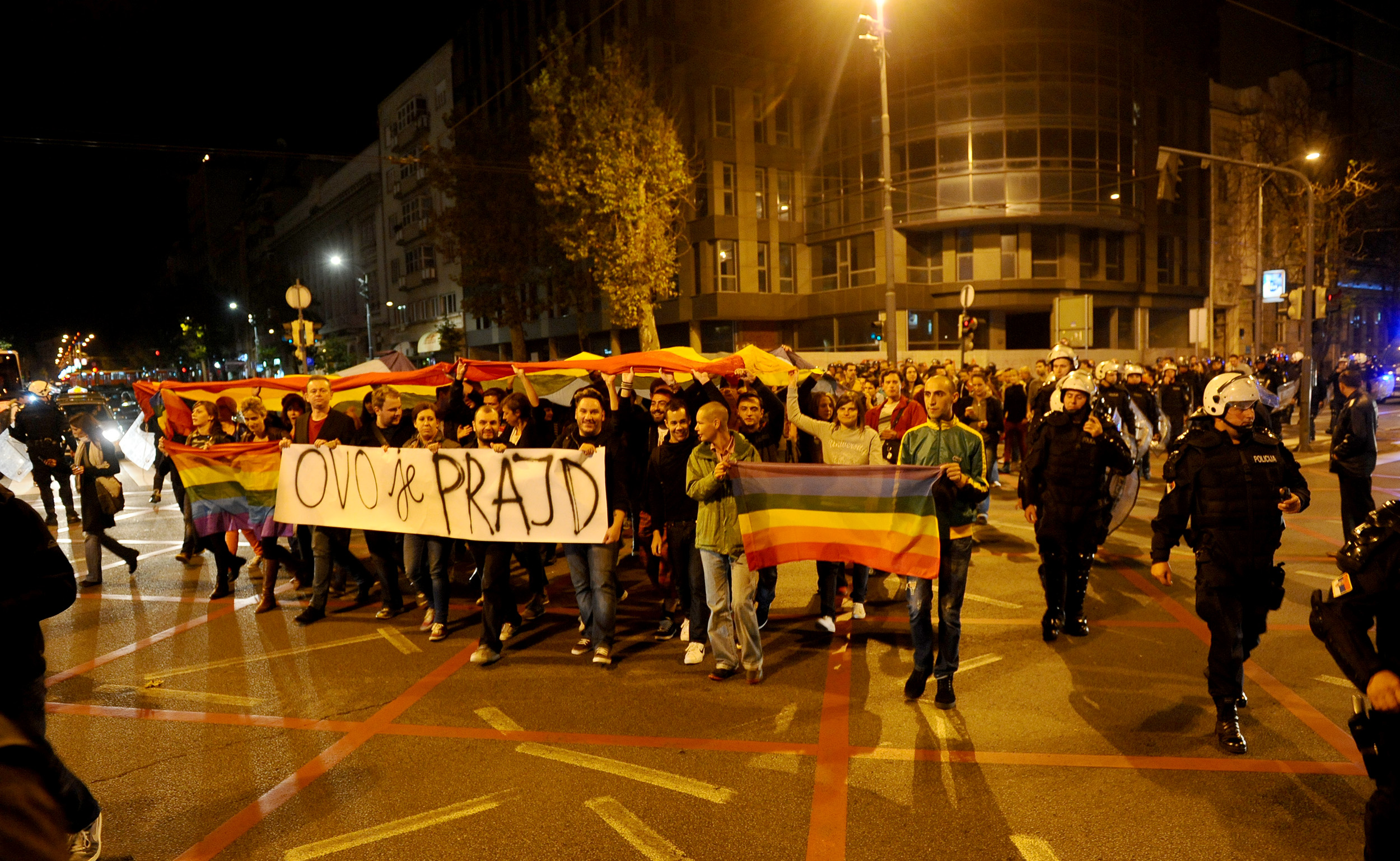 The Constitutional Court of Serbia decided that the 2011 Pride Parade ban was unconstitutional.

The state banned the Pride Parade for the third year in a row. When the organizers were informed about the ban, they organised a Midnight Pride that began in front of the National Assembly of Serbia. This event gathered a large number of activists, LGBT+ community members and supporters. The international public and the media dubbed the event the Stonewall of Eastern Europe.

Amendments to the Law on Pupil and Student Standards were adopted to include provisions on the prohibition of discrimination, violence and abuse in institutions based on sexual orientation.

A Law on Adult Education was adopted, which mentions sexual orientation in its section on equal opportunities. 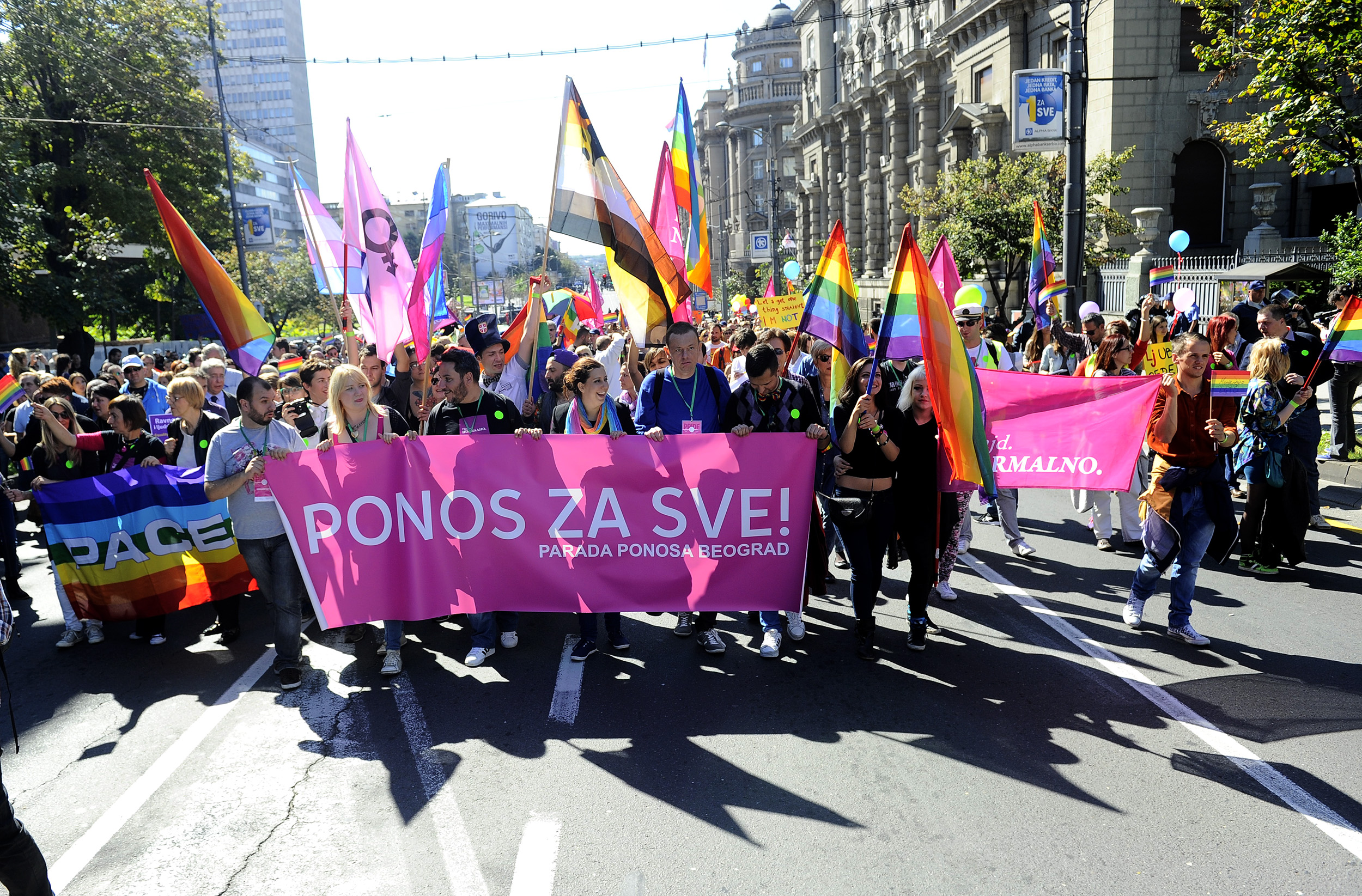 On 28 September 2014 the first Belgrade Pride without incidents and organised violence was successfully held. The Pride Parade was held under the slogan “Pride for All”.

Law on Electronic Media was adopted mentioning sexual orientation as one of the bases to ban discrimination, hatred and violene in media broadcasts. At the same time a new Law on Public Information and Media was adopted, and its two articles mention sexual orientation as a basis to ban hate speech and distribution of media information interpreted as acts of violence and which may cause serious direct and irreparable consequences. Law on Execution of Non-Institutional Sanctions and Measures was adopted, stipulating that a citizen who is subject to these measures and sanctions must not be put in an unequal position, among other things, due to his or her sexual orientation.

(FOTO:Vesna Lalić)  Belgrade Pride 2015 was held on 20th September 2015 under the slogan “My Rights, My requests”. That year Belgrade Pride became a member of the European Pride Organisers Association (EPOA) and the world-wide association of Pride organisations (InterPride). Pride Week and Belgrade Pride were held without incidents, with reduced police presence. Government representatives gave even more affirmative statements regarding the respect for human rights of the LGBT+ community and supported the realisation of the Pride Parade. 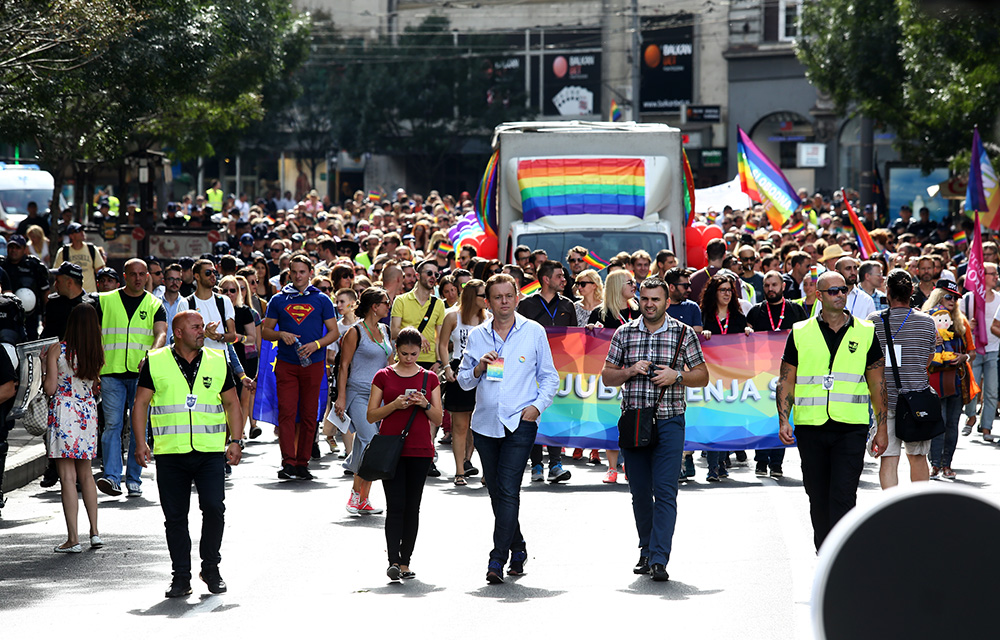 The Pride Parade was successfully held for the third time in a row on 18th September 2016. It gathered 2,000 participants under the slogan “Love Changes the World”, while more than 25 events took place during Pride Week. All these events were held without incidents and with an even more reduced police presence.

During an appointemnt of the members of the Governments of Serbia, the Prime Minister informed the public that the new Minister of State Administration and Local Self – Government – Ana Brnabic is a lesbian.

June 29 – Ana Brnabic stepped on the position of the President of the Serbian government as the first woman and out lesbian.

July – Pride Parade Oranising Committee announces Pride under the slogan “For Change” and for the first time clearly demands from the government to legally regulate same-sex communities.

September 2017 – Serbian Prime Minister Ana Brnabic and two ministers were part of the fourth consecutive Pride Parade that was attended by more than 2000 people.

(FOTO:Vesna Lalić)   May 17 – Belgrade Pride was announced for September under the slogan ’’Say yes!’’ with two clear requests for the state: adoption of the Law on registered same-sex partnerships as well as the Law on gender identity.
August 16 – Pride Info Center was reopened as a safe and inclusive space in one of the busiest main streets in Belgrade. The difference from the previous Center was that the new one was to stay open permanently, after Pride, but also the fact that the new, larger space would provide the ability to host lectures, panel discussions, movie screenings, HIV testings, a big number of charity events, etc. By the end of 2018, more than 10 000 people visited the Center.
September 16 – Belgrade Pride was held succesfully for the fifth consecutive time. Pride Week consisted of 65 events held at multiple locations in Belgrade. More than 2500 marched at the Pride Parade and the number of policemen had drastically decreased. After the march, a multi-hour entertainment program was held at the Students’ park for the first time.
November 2 – The first criminal verdict was issued in which the motive of hate was taken as a special aggrevating circumstance during the sentencing. Although hate-motivated crime, as a separate article, was introduced into the Serbian Criminal Code as a mandatory aggrevating circumstance in 2012, this was the first time that the article had been used in a verdict.