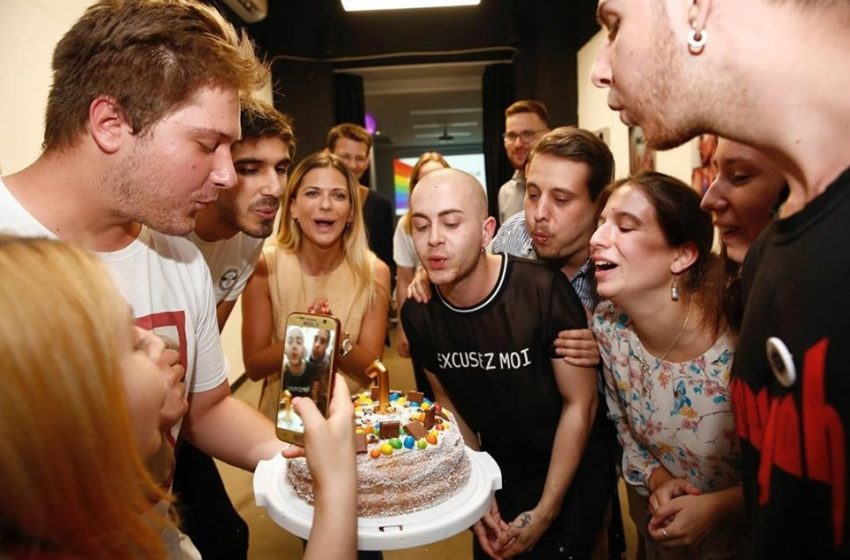 The opening of the exhibition “Love” by artist Martin Stamenković marked one year since the opening of the Pride Info Centre in Belgrade. More than 15,000 people visited during that period, and helped join the fight for the rights of LGBT members who belong to the community. As Pride Centre Coordinator Jovan Ilić told Tanjug, incidents happened during one year, one of which was more serious, but they also survived. While there was daily spitting on the window, the tearing of rainbow flags, and snowballs, it helped that nice things that also happened, like new friendships, new love … “We have a lot of people who are our allies and we get them on a daily basis, because when we explain to someone that we are not threatening anyone’s rights, but that we just want to exercise ours, they understand us and want to fight for us,” Ilic said, “a lot of volunteers at the Centre, as well as a lot of people who struggle along-side them.” As he says, these straight allies help them because they think everyone should be equal. “A lot of straight people think they don’t know anyone who is LGBT, and then they go through here, they see that there are some people who do something, they hang out and maybe they don’t come in for the first time, but after a couple of times, they ask what they can do, and many of them are with us and help us fight”, Ilić says. The Pride Info Centre on Kralja Milana Street hosted a large number of lectures, discussions, debates and educational workshops, including sexual health and HIV testing, during one year. “We have informed citizens about our community, educated people from the community on various issues and we have organized numerous workshops, debates on sexual health as well as HIV testing, because sexual health is very important and people need to know their status”, said Ilic. He also said that a year ago, the existence of the Pride Info Centre seemed unrealistic to them, and they also feared the possible outcome, because it is the first public centre in Serbia as well as the Balkans. Stamenković, the author of the exhibition “Love”, which celebrated the Pride Centre’s anniversary, has been in photography since 2013, and so far, apart from the exhibition that opened tonight, there have been two others. As he states, in his work he mainly deals with specific topics that are still taboo, that is, hidden issues that are not discussed. “In a way, my job is to talk about problems because everyone goes through the same or similar problems, but rarely does anyone talk about them. My work is primarily focused on accepting oneself and promoting love,” Stamenković told Tanjug. The exhibition, which he opened tonight, has been in the making for a year and a half, and has inspired him to meet two gay couples, that is, their love stories. In some of the photos Stamenković posed, so self-portraits can be seen in the exhibition. “With this exhibition, I tried to show how important it is to love yourself, how important it is during your life to find someone who will love you the way you are, but in principle the focus is on how important it is to accept yourself, because after all we are with ourselves and with our thoughts, “said Stamenković, adding that he felt it was very important for us all to accept ourselves fully as we are.